It will probably take a couple of days before my Google Partner status is updated with my certification details. in the meantime, I’ll be implementing some of the strategies  I learned about to the benefit of my PPC customers. 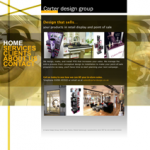 The website was designed by Wavy at The Mitchesons, while we worked on the site’s architecture and turning the design into a responsive WordPress template.

While this represents a great start to our SEO efforts, there is still much to do!

I run what I consider to be a successful  search engine optimistion (seo) campaign for a local client, with lots of page one result in Google for his local keywords, and improving conversion rates to boot. However, I was recently asked by the client to compare my service with the equivalent cost of just running an AdWords PPC campaign (I think a Yell salesman had been bending his ear).

Well, the first thing I did was try to calculate the cost of getting 1,000 unique visitors a month via AdWords. What soon became clear was the following:

So, the result of moving over entirely to AdWords would in all likelihood have been my client paying a lot more for a lot less. I calculated that the client would be spending about 4 times more on AdWords to generate the same amount of, but poorer quality, traffic.

There’s another angle to this story too. Inexperienced people think of AdWords as being simple and easy. However, running a successful, efficient AdWords campaign is a complex and time consuming process if you’re going to do it properly. This is because bids constantly change, adverts need frequent tweaks and equally frequent A/B testing – its almost a full time job.

So, while AdWords may seem like better value for money, it may prove to be the opposite.